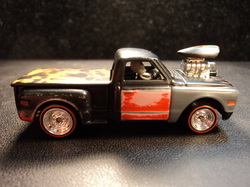 Custom 69 Chevy Rat rod truck
This 69 Chevy truck got a full make over and lot's of customizing done to it. The truck was not stripped as normal so I could scuff up the paint to make it look like a true Rat rod. It was then painted flat black and scuffed the paint to show it's original color in spots..
The bed was covered and a cool skull mural was airbrushed on it..The driver door also has a skull. The hood was cut and a cool blown Rat rod engine was put in. The interior has a lot of modifications including a custom center console, a NOS bottle a center mounted tv screen and the coolest hand painted skull shifter around. Chrome steelies mounted on red line real riders round out the package..Custom aluminum exhaust pipes were added to the rear.. This truck is unique to say the least...

Click on any picture to see a larger image